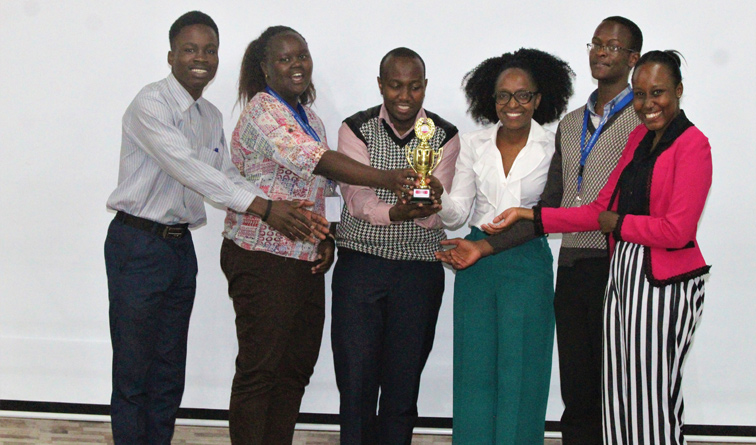 Three teams were chosen to represent Strathmore University at the Hult Prize regionals to be held in March 2020 during the on-campus Hult Prize competition held on 8th and 9th November, 2019. The three top teams – Maji Mazuri, Auriger and the Trendsetters – will battle it out against other teams in the region. The very best startups represented at each summit secure a spot in the world’s largest accelerator for impact in Boston, Massachusetts, where the winning team receives one million dollars in seed capital.

The Hult Prize competition is a global movement that is student-centred and that revolves around businesses that are aimed at solving various social problems across the world. It brings together some of the brightest and most innovative students from all over the globe in a means to create an environment that can foster innovation of business ideas that are geared towards solving social problems.

The on-campus edition is the grass root level from which business ideas and entrepreneurs are sourced. Participants compete for an opportunity to advance to the regionals level which are held in 25 cities around the world, from which winners get to advance to the accelerator program hosted in the UK.

The accelerator program gives participants the opportunity to expand on their ideas through improvement of prototypes and receiving advice from industry experts in preparation for the world finals that are held in September every year at the United Nations headquarters.

Each year, the Hult prize gives a theme of an existing social problem in the world which students are expected to come up with business ideas that revolve around it. The theme was given by the former President of the United States of America, Bill Clinton. The theme for the 2020 challenge is “Bold Businesses for a Better Planet.”  Teams this year, are expected to showcase sustainable businesses to positively impact people, profit and planet.

This year’s on campus edition participants attended a seminar on this year’s theme of “Bold Businesses for a Better Planet.” The seminar was focused on the Sustainable Development Goals covered by this year’s theme. The SDGs covered are: Goal 3 (Good Health and Well-being), Goal 6 (Clean Water and Sanitation), Goal 7 (Affordable and Clean Energy), Goal 8 (Decent Work and Economic Growth), Goal 9 (Industry, Innovation, and Infrastructure), Goal 11 (Sustainable Cities and Communities), Goal (Responsible Consumption and Production), Goal 13 (Climate Action), Goal 14 (Life Below Water), Goal 15 (Life On Land), Goal 17 (Partnerships for the Goals).

Auriger emerged first with thier idea focusing on Goal 9. The second-placed team was the Trendsetters team whose solution was focused on the girl child and Goal 3 & 6. In third place we had team Maji Mazuri whose idea focused on Goal 3 and Goal 6.

Dr. Pacifica Achieng,Director Climate Change Programmes Coordination, Ministry of Environment and Forestry, gave the keynote speech on behalf of the CS Environment Keriako Tobiko.  There was an electric car showcase to show how we need to move towards environmental conservation even through our means of transport. The judges this year included; Martha Karua,  George Kagwe, Wycliffe and Sonia Kabra (Co-founders of Buupass and winners of the $ 1,000,000 in 2016 Hult Prize), Mercy Kyalo, David Ekabouma among others.

This article was written by Grace Kavata.

If you have a story, kindly email: communications@strathmore.edu